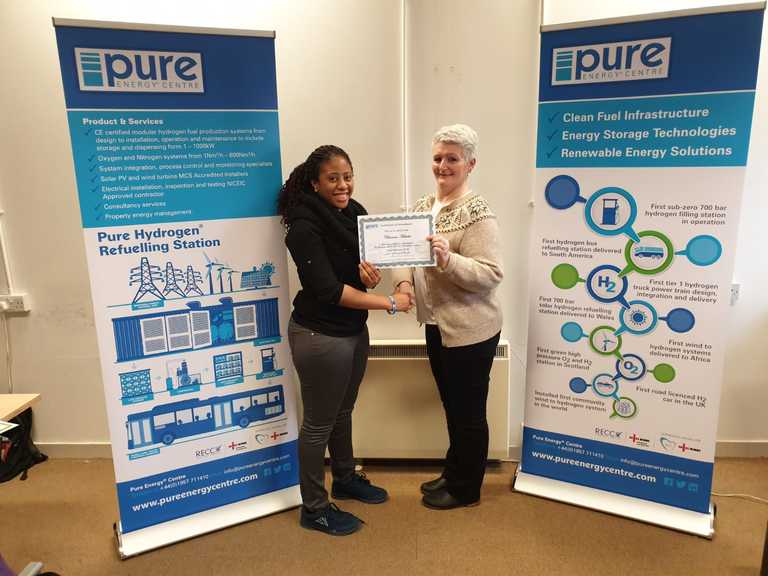 Chioma Ihuoma Adiele is an Expert in Electrical Engineering with experience in the design and assembly of low voltage electrical panel catering to the power sector, construction and building sector, and the oil and gas industry.

Currently, she is pursuing a master’s degree in Energy and Environmental Management in Europa Universität Flensburg, Germany.

Her interests are in using energy as a tool to build a sustainable world. Taking a cue from the first law of thermodynamics which states that energy cannot be created or destroyed in a system, only transformed from one form to the other.

This shows that energy in whatever form is a dynamic commodity, that can be explored to provide solutions to current world issues.

She would, however, like to focus on energy efficiency and the use of renewable energy to provide access to electricity in Nigeria and mitigate climate change.

In her leisure time, she likes singing, travelling, dancing and meeting new people to gain a different perspective and insight into life from other cultures.

She then applied the knowledge she acquired from both her engineering background and the hydrogen training to investigate how a community can get involved in hydrogen activities. She also investigated the production of hydrogen derivatives such as Ammonia.

The findings of the work Chioma did was then used to produce a pre-feasibility study ammonia energy storage.

She also worked as part of a team on investigating the possibility of implementing a hydrogen economy on an island setup.

Chioma is charismatic and always try to find solutions to problems as they occur.

She has the ability to explain difficult problems in simple words and is also able to focus to deliver tasks in a timely manner.

At the Pure Energy Centre, we are proud to have had Mr. Chioma Ihuoma Adiele from Nigeria onboard.

We have transferred knowledge about hydrogen storage, hydrogen production, hydrogen stations, and renewable technologies as well as some strategies as to how to apply these in the real world.

We hope that Chioma will be able to apply hydrogen technologies in her home country and develop hydrogen West Africa as well as renewable hydrogen in Africa as a whole.

This website uses cookies to improve your experience while you navigate through the website. Out of these, the cookies that are categorized as necessary are stored on your browser as they are essential for the working of basic functionalities of the website. We also use third-party cookies that help us analyze and understand how you use this website. These cookies will be stored in your browser only with your consent. You also have the option to opt-out of these cookies. But opting out of some of these cookies may affect your browsing experience.
Necessary Always Enabled
Necessary cookies are absolutely essential for the website to function properly. These cookies ensure basic functionalities and security features of the website, anonymously.
Functional
Functional cookies help to perform certain functionalities like sharing the content of the website on social media platforms, collect feedbacks, and other third-party features.
Performance
Performance cookies are used to understand and analyze the key performance indexes of the website which helps in delivering a better user experience for the visitors.
Analytics
Analytical cookies are used to understand how visitors interact with the website. These cookies help provide information on metrics the number of visitors, bounce rate, traffic source, etc.
Advertisement
Advertisement cookies are used to provide visitors with relevant ads and marketing campaigns. These cookies track visitors across websites and collect information to provide customized ads.
Others
Other uncategorized cookies are those that are being analyzed and have not been classified into a category as yet.
SAVE & ACCEPT