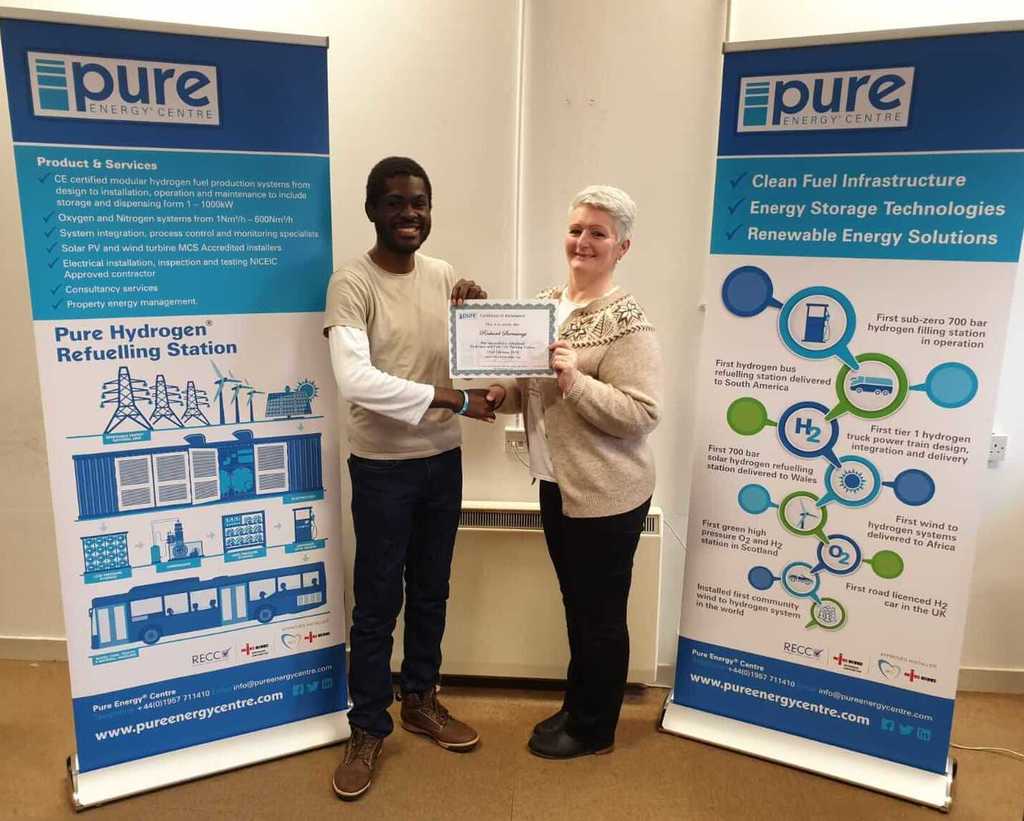 Richard Sseruwagi, who has an electrical engineering background, is a Ugandan energy engineer and entrepreneur who has worked in the Ugandan energy and energy services sector.

As of 2019, he is a student at Flensburg University under the M.Eng. Energy and Environmental Management Program.

He also has a great entrepreneurial appetite, and this has translated into a couple of projects in East Africa in energy access.

‘Like mini-grids, I perceive that hydrogen generated from sources such as municipal solid waste has the potential to democratise energy access and storage.’

Away from work, Richard spends his time playing a guitar, reading, coding and a bit comedy.

Find out more about Richard Sseruwagi, motivated by energy

At the Pure Energy Centre, Richard participated in a training course on hydrogen technologies at our office in Unst in March 2019.

He, later on, applied part of the knowledge acquired during the course in completing a pre-feasibility study for renewable heating and the possibility of implementing a hydrogen economy on an island.

The questions asked during the training course and his focus on delivering the pre-feasibility study clearly demonstrated his character in identifying opportunities.

This also showed determination at documenting these into a document in the appropriate method and with the appropriate information to support the claims made throughout the report.

He used this knowledge and the one acquired during the course to investigate the heating element of the study.

At times, he also made reference to financials and their impact into the viability of a project, which is an important part of an engineer’s career.

At the Pure Energy Centre, we are proud to have had Mr. Richard Sseruwagi onboard learning about hydrogen storage, hydrogen production, hydrogen stations, and renewable technologies as well as some strategies as to how to apply these in the real world.

This website uses cookies to improve your experience while you navigate through the website. Out of these, the cookies that are categorized as necessary are stored on your browser as they are essential for the working of basic functionalities of the website. We also use third-party cookies that help us analyze and understand how you use this website. These cookies will be stored in your browser only with your consent. You also have the option to opt-out of these cookies. But opting out of some of these cookies may affect your browsing experience.
Necessary Always Enabled
Necessary cookies are absolutely essential for the website to function properly. These cookies ensure basic functionalities and security features of the website, anonymously.
Functional
Functional cookies help to perform certain functionalities like sharing the content of the website on social media platforms, collect feedbacks, and other third-party features.
Performance
Performance cookies are used to understand and analyze the key performance indexes of the website which helps in delivering a better user experience for the visitors.
Analytics
Analytical cookies are used to understand how visitors interact with the website. These cookies help provide information on metrics the number of visitors, bounce rate, traffic source, etc.
Advertisement
Advertisement cookies are used to provide visitors with relevant ads and marketing campaigns. These cookies track visitors across websites and collect information to provide customized ads.
Others
Other uncategorized cookies are those that are being analyzed and have not been classified into a category as yet.
SAVE & ACCEPT